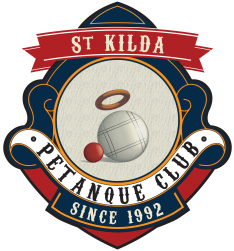 Petanque. A fun game with a weird name.

Pronounced “Paytonk”, this sport find its orgin in the early 1900’s in the south of France. Petanque means “feet together” (“pieds tanqués”), as player throw bowls (“boules”) with their two feet inside a small circle and try to get as close as possible to a little wooden jack (“bouchon”/“cochonnet”) to score points. It can be played i
ndividually or more frequently in teams of two or three.

Petanque arrived in St Kilda in 1992, when the “St Kilda Petanque Club” was formed and combined with the St Kilda Bowling Club and the Emerald Hill Cricket Club to form the St Kilda Sports Club. A “piste” was constructed on a disused bowling green. There are a number of clubs in Australia and in Victoria. All in all 2500+ players down under. Petanque is played in a very social spirit but can also be very competitive.

The St Kilda Petanque Club embraces both aspects of the game. Indeed, we have a social gathering every Friday night starting at 5pm where we play, have a drink and share a barbecue all together, mixing all level of players and often welcoming visitors curious to discover what petanque is all about. We also promote the competitive aspect of petanque. 3 of the last 4 Australian representatives for the Petanque World Championship are members of the St Kilda Petanque Club and in 1996 the Australian Championships were held at the St Kilda Sports Club. Every year, we have players playing the Asutralian National Championship as well as international competition such as NZ Open, Pan-Pacific, Oceania, Thailand Masters etc…

Whether you play or not, if you want to try petanque and/or organise an event around petanque, feel free to join us or contact us. You can find us on Facebook or Club President Alexis Susser on 0407658164 or via email bookings@stkildasportsclub.com.au

Petanque is one of the family of games that involves throwing or rolling a ball towards some point. The family includes the Italian Bocce, the English/Scottish Lawn Bowls, Irish Road-Bowls, skittles, and American Ten Pin Bowling. This family evolved from some of the earliest games played. Petanque involves throwing a heavy metal “boule” on a “piste” (a rough gravel surface) towards a small wooden ball, over distances of 6 to 12 metres.

Prior to 1910, the version of the game played in France was Jeu Provencale, where the player is permitted to take two steps before the boule is played. In 1910 Jules LeNoir, a very well known Jeu Provencale player suffered severe injuries in an accident, leaving him permanently in a wheel chair. To enable him to continue to enjoy his favorite sport, some of Jules’ friends modified some of the rules, introducing the concept of playing the boule from a fixed point (now a circle scribed on the gravel, in which both feet must be firmly planted). This new game was given the name of “pieds tanque”. As the popularity of the new game increased, it evolved into what is now “petanque”. It is played throughout the world, but is strongest in France and in those countries where the french have had influence. Worldwide, the number of regular players is in the millions. There are a number of clubs in Victoria, with numbers growing. Some clubs are associated with wineries, reflecting common additional interests of petanque players. The game is characterised by a casual atmosphere, is very inclusive and whole families often play together.